28 replies to this topic

As just about all of you probably know, IW have f**ked over the PC gamers by not allowing dedicated servers and only using their IW.net system.

There is a petition going to get them to try and change their minds, you can sign up here:

Also, just about everyone who knows about this now is also cancelling the preorder, you don't get anything from it anyway, just get it straight away, which will be pointless because without dedi servers the online will be crap. Now obviously this is up to you, but I an many others are dropping the preorder, again in protest, so that is another option for you, but please please sign the petition

I got a visitor message asking what it is all about. If you don't know then i will put it all here:

you can listen to the interview here: http://www.ustream.tv/recorded/2369799

for those that don't want to read or listen, i will sumarise:

this is from Fourzerotwo who is basically the head developer of the multiplayer side of the game, so it is very trustworthy, it is from IW themselves. Basically, what he has said is this:

*
We're doing a lot on the backend to make the game accessible for everyone.
*
There is no delay for the PC version of MW2
*
There's prestige mode
*
Jason West at the MP event, said that he was dead on, on the matchmaking servers. We've been building a system on the backend called IW.NET.
*
You are completely reliant on IW.NET. There are no server lists. There are no dedicated servers.
*
You have private matches where you can customize the game
*
You cannot put MW2 on a dedicated server.
*
This is the first time we've ever done something like this and the team has huge plans for what IW.NET develops into.
*
Customizing your game...you have quite a few options in a private match
*
You're getting same game (as in Console), plus matchmaking and private match.
*
Server admin point-of view, NO DEDICATED SERVERS

I've summarized some of my own thoughts from the cast here:

* IW partnering through Steam is what you will see in the future. Matchmaking is not through Steam, but IW.NET is run in conjunction with Steam.
* GSP's will no longer be renting out servers.
* No PunkBuster. VAC will be used as an anti cheat.
* Retail distribution: Pre-orders will get a disk. Or you could order from Steam.
* DLC may now need to be paid for - not confirmed.
* Piracy was only a small reason for going to IW.NET - not the whole reason.

* No more clan servers. Private matches, replace clan servers.
* Listen servers will connect to each other.
* IW.NET/Steam will replace the community server admin

* Competitive gaming has changed forever.
* It might be possible in the future for IW engineers to load a "competitive" setting on IW.NET, but it is far from a guarantee. It might also never happen.

* Modding the game is now very much in question. Fourzerotwo had no info on modding. However, it appears that there will be no mods or maps for MW2.
* Modding in SpecOps? Unknown.

So what this means:

NO dedicated servers, so no clan servers, or clans.

NO being able to have clan matches/join other clan servers

NO punkbuster, instead they will be using VAC (Valve Anti-Cheat System), the same thing used in CS:S, HL:deathmatch, TF2, L4D etc

There will be private matches, but they can't be moderated by anyone and not just anyone can join, they must be invited

There is apparently also a possibility that PC gamers will now have to pay for updates, map packs, patches etc, much like console gamers do.

There is a possibility of a couple of things where EVENTUALLY there will be dedi servers. They are:

Initially there will be both dedi and matchmaking systems (**)
A few patches in the future, there will be dedi servers, similar to what L4D was initially (****)

All from the top, but not finalised yet, but I for one am dropping my preorder right now and waiting for the game to come out to see if it is all true before I get it, i'm not getting some sucky game where you have to go through a matchmaking system with no clan servers

Thumbs up on objectivity...


Sorry but I see no point in signing this, lots of games run through steam or other non-dedicated servers and it's the first time I learn about such a complaint. And the game remains the same with matchmaking or with a dedicated server, I do not see how it would get suckier. I would be pleased if you could enlighten me on that.

Another thing: "There is apparently also a possibility that PC gamers will now have to pay for updates, map packs, patches etc, much like console gamers do."

Yes, we could have a debate about the legitimacy of asking money for map packs, but updates and patches (and etc.?) have never cost me a penny through Xbox Live, and they probably never will. IMHO this petition thing is some kind of bad propaganda of which I do not even understand the purpose...


If I were you, I would quietly turn my back and walk away. Thank you and have a nice day.

The executive producer for the Battlefield series has vowed on his Twitter that DICE will continue to back hard-core PC gamers the hilt: "Dedicated servers FTW. What ever secures a better online experience is a given for us."


"Quick! Let's get to EB and cancel our pre-orders!"
And from Infinity Ward: silence.

Elsewhere, the fallout is still settling from IW's bombshell. Many have sworn to cancel their pre-orders of Modern Warfare 2; many more have called this fiasco the death of competitive gaming as we know it.

While unlikely to sway the Call of Duty developer, an online petition has started calling on IW management to reconsider their decision, and has already shot to over 36,000 signatures.

The case made by the petition is succinct: "Get Infinity Ward to review their decision not to allow fully dedicated servers for their forthcoming game release CoD:MW2. Remember that this Call of Duty was made popular by PC Gamers who have supported the series throughout."

To listen to the podcast where Rob Bowling broke the news, click here. Follow through to the end, and you'll witness a train wreck in slow motion. The sense of despair in the hosts' voices is unmistakeable, as they openly compare this perceived betrayal to both the assassination of JFK and the Hindenburg disaster: "Oh, the humanity!"

Yesterday's news story covering the downgrading of Modern Warfare 2 has sparked nigh on 300 comments -- you can join the discussion here.

And the game remains the same with matchmaking or with a dedicated server, I do not see how it would get suckier. I would be pleased if you could enlighten me on that.

I will. On a dedicated server you can have up to 64 (sometimes more) players on at once and not have to worry about your game if one player gets a disconnect. This matchmaking thing means you have to connect to ONE players PC. This has a limit (in game) of up to 16 players. Just because it works on a games console that could NEVER handle more than 16 players doesn't mean we PC users should suffer. Can you imagine the stain on his internet with up to 16 players connecting to his PC? The same PC he uses to play the game!! He get's a disconnect and all players are out. Also consider his ping. As a host you have a huge advantage over other playeras as you're ping will be super low. It's not what COD is about.

IMHO this petition thing is some kind of bad propaganda of which I do not even understand the purpose...
If I were you, I would quietly turn my back and walk away. Thank you and have a nice day.

Do you play many FPS games online? I doubt it. If you did you'd see exactly why dedicated servers for a game the scale of COD: MW2 are an absolute must.

No. This is the single most messed up decision a games company has ever made. And when do they let the PC players know about it? Three weeks before the release of the game. A long time after a heck of a lot of people pre-ordered the game and the dedicated servers that we were told we could pre-order.

I don't mean to sound like a bitch toward you Hog. It's not a personal attack. I just feel so strongly about this issue and if my tone causes you any insult I appolgize right now.

Just for the record, a friend of a friend works for a games store here in Ireland. He says that over 850000 PC users have already cancelled their pre orders of COD: MW 2 and they fully expect that number to hit 1000000 (yes that IS one million) by this coming Friday. It's a farce. Infinity Ward say it's because of piracy. Bull. Are they saying that they don't want or need the 1 million PC gamers cash? 1 million buyers multiplied by the priceof the game equals a hell of a lot of money.

I've signed this petition and so have many thousands of others. I will not buy this or any other Infinity Ward game unless they pull the finger out of their console gamer biased backsides.

I had no idea what this comic was about until I read this thread. Now I -- well, I still don't know what it's about really. Just let me know when the revolution starts. I'll bring the torches.

Just let me know when the revolution starts. I'll bring the torches.

Before revolution comes mourning. Weep properly and you will be filled with the angel of vengeance on the morrow.

ffs get a real life, it's a f**kin game for christ sake

Before revolution comes mourning. Weep properly and you will be filled with the angel of vengeance on the morrow. 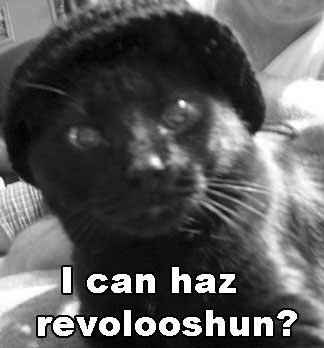 ffs get a real life, it's a f**kin game for christ sake

It's a game they want us to pay $60 for and we can't mod it or even setup a dedicated server after they said we'd be able to do so.. This issue is not going to go away. If you were a gamer you'd understand